Our little Featherless is growing up!  It's hard to believe the November event will be our semianniversary.  The lineup is as follows:

Jon Bernstein wrote the screenplays BEAUTIFUL, starring Minnie Driver and directed by Sally Field, RINGMASTER, starring Jerry Springer, and Disney's MEET THE ROBINSONS.  His plays include SHOWCASE! and THE BLUNDERS.  He teaches screenwriting at UCLA extension and Wordspace.  His book Ravenous Ambition will be out in 2011.

Lisa Locascio was born in Chicago and holds two degrees from New York University.  She is currently a PhD student at the University of Southern California, where she also teaches writing.  Her work has appeared on the American Short Fiction website as well as in several print journals, including The Northwest Review and Fifth Wednesday Journal.  For more information, please visit www.lisalocascio.com.

Katy Petty received her BA in Semiotics from Brown and her MFA in Creative Writing from CalArts.  Her work has appeared in Black Clock, Ghetto Blaster, Monologues by Women for Women, and the film RADIATION in which she also starred.  Currently, she is writing her first novel, Perpetual Twilight.

The reading will take place at 7:30 pm on November 21, at Wordspace.

Also!  Stay tuned for news about the Featherless Christmas party in December.
Posted by Unknown at 5:05 AM No comments:


Posted by Andrea Lambert at 9:33 AM No comments: 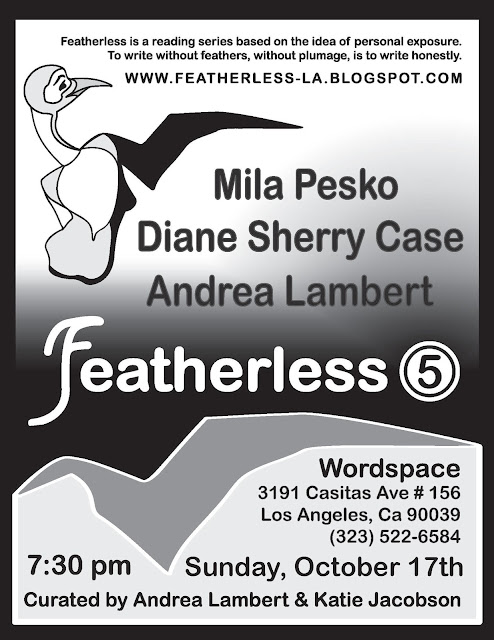 Mila Pesko has published an autobiography disguised as a children's book called, Little Mary of the Rose and the Giant Baked Bean. She is now in the process of developing a show and a movie about Patti Smith. Neither of which she will be disguising as a children's anything. She lives in Smoke Free, but not Mafia Free, Glendale with her flying cat, Sam.

A veteran actress of film, stage and television, Diane Sherry Case also has her Masters of Fine Arts in Creative Writing. She has taught creative writing to incarcerated teens, private school girls, and adults. Both her fiction and non-fiction have been widely published in anthologies and journals, as well as adapted to film. Highlights of her life include meeting the Beatles, playing Lana Lang in Superman, and working as the strong man's assistant in a Mexican circus.

Andrea Lambert is the author of Jet Set Desolate (Future Fiction London) and Lorazepam and the Valley of Skin / 730910-2155 (valeveil press). She is in process of revising a punk novella called Scaffolding. Her work can be seen in 3:AM Magazine, Chronometry, and Lime Tea. She co-curates the Featherless reading series with Katie Jacobson.  She lives in Los Angeles.

Reception to follow.
Posted by Andrea Lambert at 1:22 PM No comments:

Featherless is a reading series based on the idea of personal exposure. To write without feathers, without plumage, is to write honestly. We encourage writers of all genres to contribute their voices.

On the second Friday of the month, three writers read for fifteen minutes apiece. If you are interested in participating, please contact us with a sample of your work.