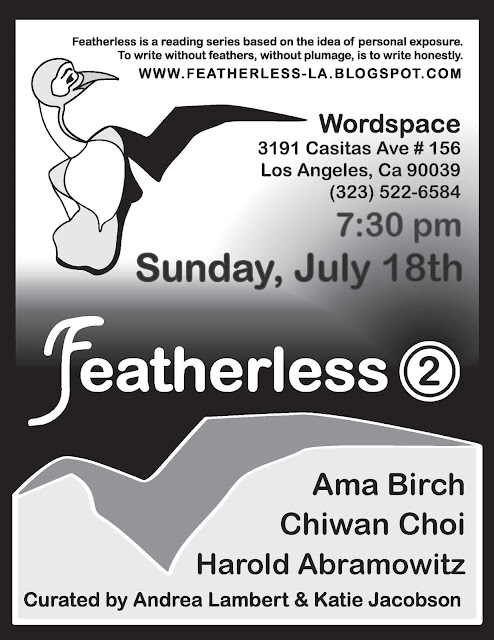 Posted by Andrea Lambert at 7:37 PM No comments:

Ama Birch lives in Los Angeles, California. She has authored three chapbooks, "Yesterday, Today, and Tomorrow," "Faces in the Clouds," and "Forms".

Chiwan Choi's poems and essays have appeared in ONTHEBUS, Esquire, and circa, among others. Chiwan's first collection of poetry, The Flood, was published by Tia Chucha Press in April, 2010. He received an MFA in Dramatic Writing from NYU and with his wife, Judith Oden runs Writ Large Press, published Los Angeles writers.

Harold Abramowitz  is a writer from Los Angeles.  His recent publications include Not Blessed (Les Figues Press) and A House on a Hill {A House on a Hill, Part One} (Insert Press) Harold writes collaboratively as part of SOSY and UNFO, and co-edits the short-form literary press eohippus labs.

Reception to follow.
Posted by Andrea Lambert at 11:46 PM No comments:

Featherless is a reading series based on the idea of personal exposure. To write without feathers, without plumage, is to write honestly. We encourage writers of all genres to contribute their voices.

On the second Friday of the month, three writers read for fifteen minutes apiece. If you are interested in participating, please contact us with a sample of your work.